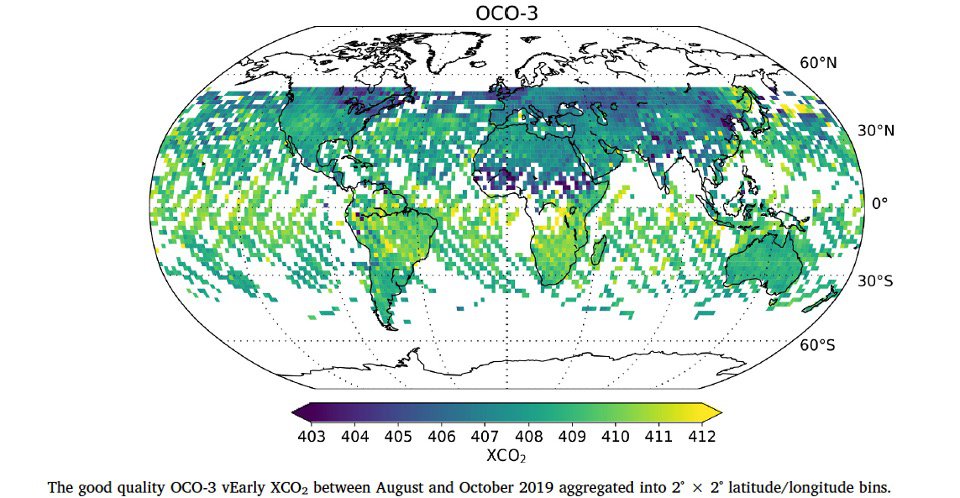 People love to root for the underdog – the disadvantaged individual, the embattled hero, the Cinderella sports team… but how about the NASA mission that was threatened with the “go/no go” not once, but twice?

Uncertainty had loomed over NASA’s Orbiting Carbon Observatory-3, or OCO-3, currently on board the International Space Station (ISS), for a few years before steadfast dedication and commitment carried the mission to the launch pad at Kennedy Space Center during the Spring of 2019. Launched on May 4, OCO-3 is now primed to share with the world all the mission’s unique capabilities and data with the publication of “OCO-3 early mission operations and initial (vEarly) XCO2 and SIF retrievals” by Taylor et al.

After a successful in-orbit checkout in August 2019, OCO-3 has been collecting science data ever since, and working to ensure a successful three (3) year mission until August 2022. The published paper, in the journal REMOTE SENSING OF ENVIRONMENT, discussed the findings and challenges of the important technology transfer of a sophisticated observatory from a free flying satellite (OCO-2) to a large fixed platform that is ISS (OCO-3). The authors reported that the science data products XCO2, column averaged atmospheric carbon dioxide dry air mole fraction and SIF, or Solar Induced Chlorophyll Fluorescence, are similar to OCO-2, the predecessor mission.

But the unique feature of OCO-3 is the Pointing Mirror Assembly (PMA), an external 2-axis pointing system that controls the spectrometer’s view of the ground. The PMA can scan rapidly over target areas such as megacities (large cities with population over 10 million) or fossil fuel sites such as large power plants, providing what is called Snapshot Area Maps or SAMs of 100km by 100km, mapped over the targeted sites. Enhanced by the ISS’s daily precessing orbit, OCO-3‘s observations are, providing both dense coverage and a diurnal perspective over time. This coverage is building a vast collection of observations between 51 deg North to 51 deg South latitude.

“We have an amazing team that has stayed focused, worked through the early bumps in the road, and is delivering useful OCO-3 science products. The benefit of the experience from OCO-2 and ongoing intercomparisons has been significant. In addition, we’ve been operating the mission while working from home in response to the global pandemic – for more months than we operated in the traditional way!”

However, the mission is not without challenges. Lead author, Tommy Taylor of Colorado State University and a member of the OCO-3 science team, indicated that calibration has been a challenge for the team,

“Much of the knowledge from the OCO-2 project translated (nearly) directly into OCO-3, e.g., spectrometer calibration, retrieval algorithms, ground system data processing. However, the engineering team had to come up with a new way to provide instrument pointing from the ISS. So far it seems like the theory and mechanics of the system are working well, but there have definitely been some hiccups with fitting together all of the puzzle pieces to refine the geolocation to the desired accuracy of sub-footprint scale required to do useful science. “

Unlike OCO-2, where the project has direct control of instrument pointing via maneuvering of the satellite bus, OCO-3 is mounted on the ISS, meaning that the maneuvering is outside the jurisdiction of the mission project. This necessitated the introduction of the PMA. The PMA is new technology, adapted from a concept on the failed Glory mission, and requires very accurate on-board calibration. In addition, the ISS makes many incremental adjustments to precisely control its orbit and to accommodate cargo delivery and removal. Furthermore, there are a number of control systems and frames of reference, both for the ISS and the PMA, all of which must be understood and interpreted at a very fine scale. This labyrinth of pieces, much like a jigsaw puzzle, has created a huge learning curve for the team in order to get highly accurate geolocation for individual measurements from the new platform.

Taylor added that the published paper is based on analysis of the first publicly available version of the data, or what the team affectionately calls VEarly. Although the vEarly data product has a few known issues as discussed in the manuscript, overall it compares reasonably well to both ground based measurements from the Total Carbon Column Observing Network (TCCON) and to collocated measurements with the much more mature OCO-2. A more robust follow-on version of the data is anticipated in early 2021. In order to start answering science questions, Taylor expressed the importance of getting the data into flux inversion models and to start looking at what the new information provided by OCO-3 may reveal about the Earth’s carbon cycle. With time, the team would like to work on that elusive goal of finding the missing land carbon sink that scientists have theorized about for years. One of the most exciting discovery opportunities for the team is being able to look at the data from both OCO-2 and OCO-3 together, when both missions are able to fly at the same time.

And we all know to never doubt the underdog.

To learn more about the OCO-3 mission and science, please visit:

To learn more about the Snapshot Area maps, please visit: