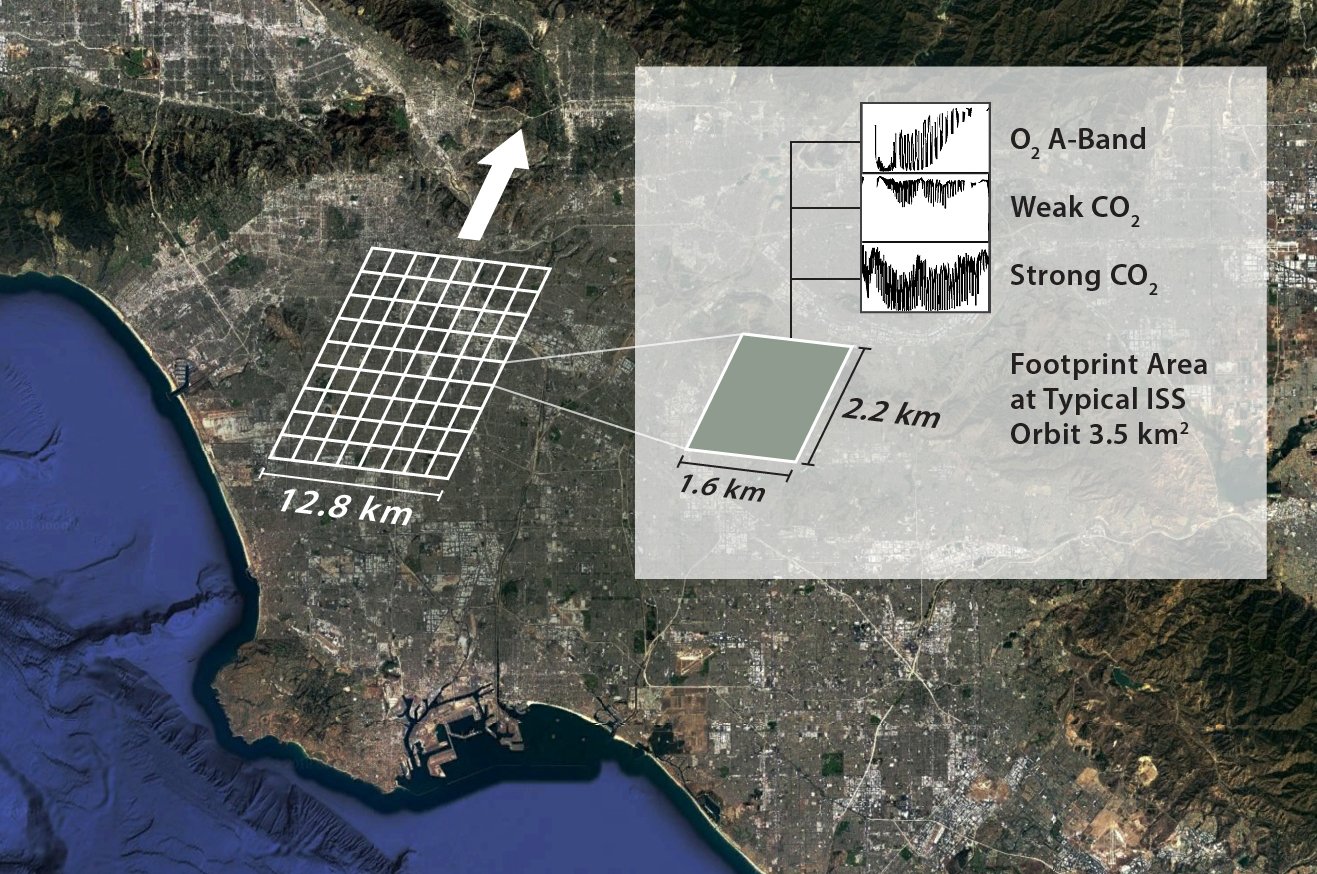 To get the representative values of XCO2, or the amount of CO2 in the measured space, the OCO-3 instrument will measure at a given location, the intensity of reflected sunlight off the Earth's surface at specific wavelengths. Gas molecules in the atmosphere absorb the sunlight at specific wavelengths. So when light passes through the Earth's atmosphere, the gases that are present leave a distinguishing fingerprint that can be captured. The OCO-3 spectrometers, working like cameras, will detect these molecular fingerprints. Then the absorption levels shown in these spectra, like a captured image, will tell us how many molecules were in the region where the instrument measured. The OCO-3 measurement approach concentrates on gathering data near the Earth's surface, where almost all of the CO2 sources and sinks are located.

One of the challenges to get to these sources and sinks, is that the light detected by the instrument must penetrate through all of the atmosphere. If you can picture the image of Earth from Space, that image will always include white swirls over the land and ocean. The presence of clouds and optically thick aerosols or uneven terrain such as mountains can block the light, and create an incomplete measurement of the complete atmospheric column. To reduce any uncertainties, the OCO-3 instrument will acquire a large number of densely-spaced samples. Each sample will cover an area of about 3 km2 when the instrument is looking straight down (nadir), along the spacecraft's ground track. The OCO-3 instrument can gather as many as 72,000 soundings on the sunlit side of any orbit. With measurement footprints of this size and density, the OCO-3 instrument will get an adequate number of high quality soundings, even in those regions where clouds, aerosols and topographic variations are present.

OCO-3 mission designers selected three specific Near Infrared (NIR) wavelength bands – O2 (Oxygen) A-band Weak CO2, and Strong CO2. The OCO-2 instrument will measure intensity over all three of these bands at the same location on the Earth's surface simultaneously. Each of the three selected wavelength bands provides specific information to measurement accuracy. The weak CO2 band wavelength, in the vicinity of 1.61 µm, is most sensitive to the CO2 concentration near the surface. Since other atmospheric gases do not absorb significant energy within this spectral range, the 1.61 µm band measurements are relatively clear and unambiguous.

To make sure that we have an accurate derivation of XCO2, we also do a comparative absorption measurement of a second atmospheric gas, O2. The concentration of molecular oxygen O2 is constant, well known, and uniformly distributed throughout the atmosphere. Therefore, O2 is the best candidate for reference measurements. The O2 A-band wavelength channel, in the vicinity of 0.76 µm, will provide the required absorption spectra. The O2 A-band spectra indicate the presence of clouds and optically thick aerosols that preclude full column measurements of CO2. Observations from this band will be used to infer the total atmospheric pressure, as well as to measure of solar light path length as it passes through the atmosphere.

Last, but not least, the strong CO2 wavelength channel, in the vicinity of 2.06 µm, will provide a second and totally independent measure of the CO2 abundance. The 2.06 µm band spectra are very sensitive to the presence of aerosols. The ability to detect and mitigate aerosol presence enhances the accuracy of XCO2. The 2.06 µm band measurements are also sensitive to variations in atmospheric pressure and humidity along the optical path. These variations in pressure and humidity have a known impact on XCO2.

The nominal planned viewing strategy of OCO-3 is to take down-looking nadir viewing measurements over land to minimize the probability of cloud and aerosol contamination. Over water measurements will be taken near the specular reflection spot (glint viewing) to maximize the signal over the low reflectivity surface. However, unlike OCO-2, which performs complex maneuvers of the entire satellite bus to observe ground targets, the OCO-3 instrument will be fitted with an agile 2-D pointing mechanism, i.e., a pointing mirror assembly (PMA). This will allow for rapid transitions between nadir and glint mode (less than 1 minute). The PMA will also allow for target mode observations, similar to those taken by OCO-2, typically at Total 20 Column Carbon Observation Network (TCCON) ground sites for use in validation (Wunch et al., 2010). The PMA will provide the ability to scan large contiguous areas (order 80 km by 80 km), such as cities and forests, on a single overpass. This will be known as "snapshot" mode and will allow for fine scale spatial sampling of CO2 and SIF variations unlike what can be done with any current satellite system. A highly automated system plans the observations for each day, prioritizing from a data base of cities, volcanoes, flux towers, validation sites, and more. We will add more details about the locations to be sampled with snapshot modes soon, but in the meanwhile, you can tell what you are interested in seeing!

Let us know about your site of interest, the science questions you want to answer, how many measurements you need, and over what time frame. We will have quarterly reviews to select from requested sites. Send the info to oco3_sam_requests@jpl.nasa.gov. 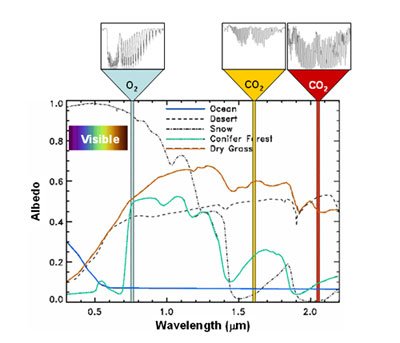 This diagram displays the spectral reflectance of common Earth surfaces at the wavelength of the three OCO-3 channels.