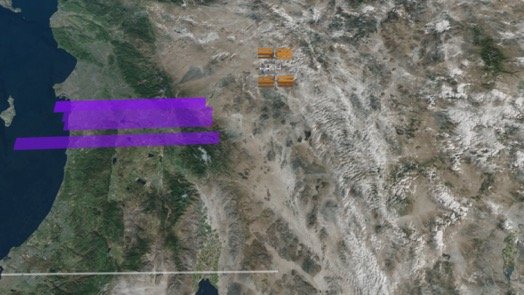 The PMA allows for target mode observations, similar to those taken by OCO-2, typically at Total Column Carbon Observation Network (TCCON) ground sites for use in validation. The PMA provides the ability to scan large contiguous areas (order 80 km by 80 km), such as cities and forests, on a single overpass. This mode is known as "snapshot" mode and allows for fine scale spatial sampling of CO2 and SIF variations, unlike what can be done with any current satellite system. OCO-3 is using the same instrument as OCO-2, but it has been adapted to work on the ISS. The instrument functions in three modes in flight: Nadir viewing (straight down), glint (reflected) and a pointing mode for target sites. Unlike OCO-2, which performs complex maneuvers of the entire satellite bus to observe ground targets, the OCO-3 instrument was fitted with an agile 2-D pointing mechanism, i.e., a Pointing Mirror Assembly (PMA) that allows for rapid transitions between nadir and glint mode (less than 1 minute).

Unlike OCO-2, which flies in a polar orbit around the Earth, OCO-3 on board ISS follows a precessing orbit. This means that overpasses will progress earlier and earlier in local time of day for a given point on the earth over periods of days. In about 30 days, at a given location, measurements progress from late in the day to early in the day. For some locations at the higher latitudes, there are periods where measurements are taken both in the morning and in the afternoon of the same day. This variable time of say sampling has implications with respect to the diurnal cycle of both clouds and aerosols (known contaminates when observing XCO2), and studies of the carbon cycle, which itself has a strong diurnal variation. The precession in time-of-day sampling will be especially informative for the SIF observations with respect to studying the biosphere response (both natural and anthropogenic) to changes in sunlight. When OCO-2 and OCO-3 operate concurrently, they will collect overlapping data and continue the important baseline begun by OCO-2, although the primary method of comparing OCO-2 and OCO-3 will be through the TCCON measurements.

Additional details can be found in the paper: Eldering et al.

This system relies on a single pair of matched mirrors in an orthogonal configuration that impart less than 0.05% change to the polarization (Mishchenko et al., 2007). For the OCO-3 PMA, the concept was extended to a 2-axis pointing system - one controlling the azimuthal (cross-track) angle, and the other controlling the elevation (along-track) angle. Although the PMA itself does not change the polarization of the light more them 0.1%, there are polarization implications because the slit image is rotated as a function of the change in the PMA, driven primarily by the elevation (along-track) angle. It is worth noting that reflected sunlight is naturally polarized by its interaction with the earth’s surface and atmosphere, especially over water.The PMA is required to allow non-nadir (straight down) observations from the fixed position on the ISS. Two important design requirements of the PMA were 1) to allow quick movement through a large range of angles, and 2) that the movement not affect the measurements through angular dependent polarization or radiance changes. To meet these objectives a variation of the pointing system designed for the Glory Aerosol Polarimetry Sensor (APS) (Persh et al., 2010) was selected.